June 10, 1970: The Harborfields Public Library was founded when residents of the district passed a proposition that provided the certificate of establishment for a new library, for a library budget appropriation of $98,780, and for the selection of five library trustees. Each Thursday, a Bookmobile parked for a few hours in Greenlawn in the parking lot at the Taylor Avenue School  (now the south wing of Harborfields High School), and in Centerport at the old site of Our Lady Queen of Martyrs Church.

January 10, 1971: The Friends of the Library held a dedication ceremony.  The following day the Harborfields Public Library opened to the public in a 10-by-50 foot trailer parked on the grass strip at the corner of Pulaski Road and Taylor Avenue.

July of 1971: The library moved into larger quarters – two portable classrooms set up adjacent to the Taylor Avenue School. One classroom was used for Adult Services, and the second classroom was divided into a Children’s Room and office space.

November 1971: When the T.J. Lahey School was completed, the library acquired temporary use of the south wing of the High School building that had been housing the Taylor Avenue School.  At first the library used this annex for administrative offices, closed book stacks, technical services and a meeting room. Over Memorial Day weekend of 1974, some walls in the annex were torn down, rooms were painted, shelves were assembled, and the six original classrooms were transformed into a library facility. The Adult Services Department now had seating space for reading and studying and there was a Children’s Room, Director’s Office and storage room. The portable classrooms housed the Technical Services Department and a Meeting Room. 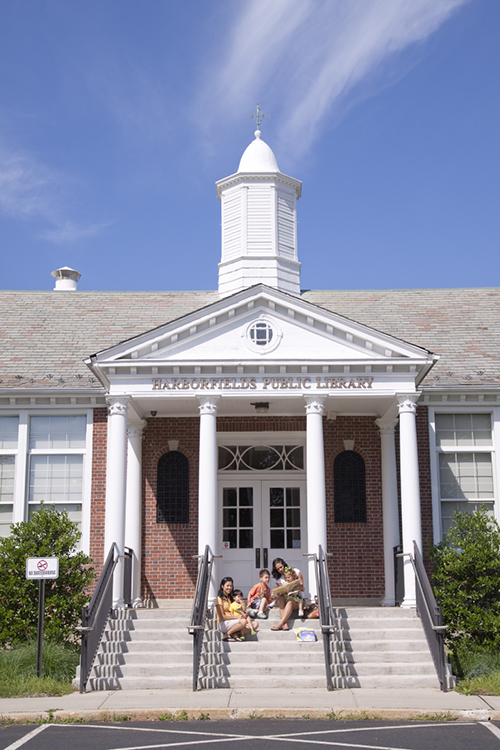 Spring 1976: When the Harborfields School Board voted to close the Broadway School due to declining enrollment, the Library Board of Trustees accepted the offer of the school for library use. Despite an awkward set-up for library service, the central location of the site, the additional space the building provided, and the potential it offered for creative use made the move an exciting event in the library’s short history. The building was conveyed to the library “for $10 and other good and valuable considerations” effective July 1, 1976.  The school district retained the adjacent playground for community use. No extensive renovation or remodeling of the original 1924 five classroom school building and its later additions was undertaken at that time.  Since all the space was not immediately needed for library use, the west wing was rented to the Country Gardens Preschool and the Huntington Township Art League, and a room in the east wing was leased to the Greenlawn-Centerport Historical Association that, in 1973, the Library Board of Trustees had been instrumental in establishing.

July 1980: The library had a collection of 74,087 books plus periodicals, pamphlets, LP records, audiocassettes, filmstrips, microforms and the beginnings of a videocassette collection.  The library loaned framed art and equipment such as cassette players, movie screens and slide projectors.  Renovations to the library became necessary as a result of the library’s phenomenal growth in collections and usage. Plans included the enlargement and reconfiguring of the Adult Services area located in the school’s old gym, a new Director’s Office overlooking it, the redesign of the Circulation desk, the expansion of the Children’s area, ramps to make the library handicapped accessible and some smaller remodeling projects.

1985: The library had become so crowded it was often necessary to set up folding tables and chairs to accommodate users.  It was decided to incorporate the former boys’ locker room off the old gym and to remove some classroom walls to expand the fiction area and make space for a Young Adult area.

2002-2005: A major expansion and renovation was to be accomplished in phases so the library could continue to serve the community throughout the duration of the project. To allow for needed additional on-site parking, the library acquired 65 feet of space from the playground adjacent to the library on the west.  Phase one began in the fall of 2002.  It involved the relocation and reconfiguration of the playground and the demolition of the west wing. The area under the wing was excavated and a lower level constructed to house the technical services department, staff and storage rooms. Above it, the new Children’s area was constructed. New additions were wrapped around the existing Adult Services area.  During the second phase, a new main entrance on Wyckoff Street, a new lobby and circulation area, a media room, and the new Adult Services area were constructed.   The third phase of construction renovated the south side of the building, adding new administrative and business offices, an art gallery, a quiet study area, a librarians’ office, the College & Career Center, and YA Central, the new Teen area.

September 18th, 2005: A ribbon-cutting and dedication ceremony celebrated the completion of the Library’s expansion and renovation project.

December 2016: YA Central was expanded and transformed into a modern space for teens, and renamed Teen’Scape.

The bulk of this brief history of the Library was written in 2010 by Carol Bloomgarden, librarian, local historian, and author.