Our complete COVID-19 procedures can be found here: COVID-19 Procedures. 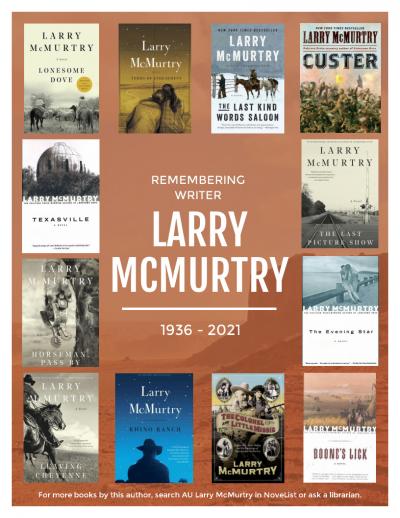 "Larry McMurtry, a prolific novelist and screenwriter who demythologized the American West with his unromantic depictions of life on the 19th-century frontier and in contemporary small-town Texas, died on Thursday at home in Archer City, Texas. He was 84.

Over more than five decades, Mr. McMurtry wrote more than 30 novels and many books of essays, memoir and history. He also wrote more than 30 screenplays, including the one for “Brokeback Mountain” (written with Ms. Ossana, based on a short story by Annie Proulx), for which he won an Academy Award in 2006.

But he found his greatest commercial and critical success with “Lonesome Dove,” a sweeping 843-page novel about two retired Texas Rangers who drive a herd of stolen cattle from the Rio Grande to Montana in the 1870s. The book won a Pulitzer Prize in 1986 and was made into a popular television mini-series."
New York Times (3/27/21) 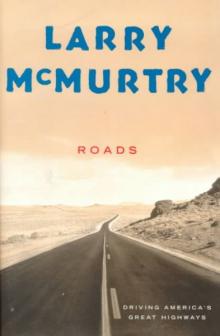 As he crisscrosses America -- driving in search of the present, the past, and himself -- Larry McMurtry shares his fascination with this nation's great trails and the culture that has developed around them.

Ever since he was a boy growing up in Texas only a mile from Highway 281, Larry McMurtry has felt the pull of the road. His town was thoroughly landlocked, making the highway his "river, its hidden reaches a mystery and an enticement. I began my life beside it and I want to drift down the entire length of it before I end this book."

In Roads, McMurtry embarks on a cross-country trip where his route is also his destination. As he drives, McMurtry reminisces about the places he's seen, the people he's met, and the books he's read, including more than 3,000 books about travel. He explains why watching episodes of The Mary Tyler Moore Show might be the best way to find joie de vivre in Minnesota; the scenic differences between Route 35 and I-801; which vigilantes lived in Montana and which hailed from Idaho; and the history of Lewis and Clark, Sitting Bull, and Custer that still haunts Route 2 today.

As it makes its way from South Florida to North Dakota, from eastern Long Island to Oregon, Roads is travel writing at its best. 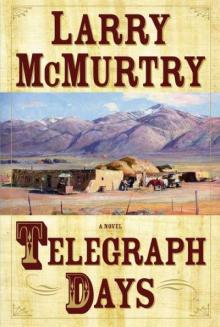 When Nellie and her brother Jackson are unexpectedly orphaned by their father's suicide on his new and unprosperous ranch, they make their way to the nearby town of Rita Blanca, where Jackson manages to secure a job as a sheriff's deputy, while Nellie, ever resourceful, becomes the town's telegrapher.

Together, they inadvertently put Rita Blanca on the map when young Jackson succeeds in shooting down all six of the ferocious Yazee brothers in a gunfight that brings him lifelong fame but which he can never repeat because his success came purely out of luck.

Propelled by her own energy and commonsense approach to life, Nellie meets and almost conquers the heart of Buffalo Bill, the man she will love most in her long life, and goes on to meet, and witness the exploits of, Billy the Kid, the Earp brothers, and Doc Holliday. She even gets a ringside seat at the Battle at the O.K. Corral, the most famous gunfight in Western history, and eventually lives long enough to see the West and its gunfighters turned into movies.

Full of life, love, shootings, real Western heroes and villains, Telegraph Days is Larry McMurtry at his epic best, in his most ambitious Western novel since Lonesome Dove. 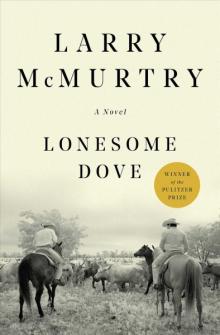 Journey to the dusty little Texas town of Lonesome Dove and meet an unforgettable assortment of heroes and outlaws, whores and ladies, Indians and settlers. Richly authentic, beautifully written, always dramatic, Lonesome Dove is a book to make us laugh, weep, dream, and remember.

Here at last is the eagerly awaited story of the early days of Gus McCrae and Woodrow Call, the heroes of Larry McMurtry's Pulitzer Prize-winning novel, Lonesome Dove.

In Streets of Laredo, McMurtry brought the story ahead, giving us Call in his old age; now, in Dead Man's Walk, he takes the reader back, to the days when Gus and Call - two of the most beloved figures in American fiction - were young Texas Rangers, first experiencing the wild frontier that will form their characters. We also meet Clara Forsythe, the spirited, unforgettable young woman whose effect on Gus McCrae is immediate and unshakable.
In Dead Man's Walk, Gus and Call are not yet twenty, young men coming of age in the days when Texas was still an independent republic. Enlisting as Texas Rangers under the command of Caleb Cobb, a capricious land pirate who wants to seize Santa Fe from the Mexicans, Gus and Call experience their first great adventure in the barren, empty landscape of the great plains, in which arbitrary violence is the rule - whether from nature, or from the Indians whose territory they must cross in order to reach New Mexico.

The untamed frontier, and the reckless men who live there - the Indians defending it with unrelenting savagery, the Texans attempting to seize and "civilize" it, and the Mexicans threatened by both - are at the heart of Larry McMurtry's extraordinary new novel: at once a riveting adventure story and a powerful work of literature. 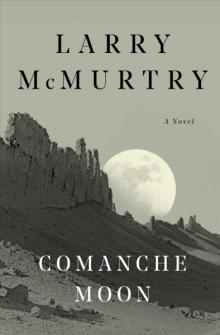 The second book of Larry McMurtry's Lonesome Dove tetralogy, Comache Moon takes us once again into the world of the American West.

Texas Rangers August McCrae and Woodrow Call, now in their middle years, continue to deal with the ever-increasing tensions of adult life -- Gus with his great love, Clara Forsythe, and Call with Maggie Tilton, the young whore who loves him. Two proud but very different men, they enlist with the Ranger troop in pursuit of Buffalo Hump, the great Comanche war chief; Kicking Wolf, the celebrated Comanche horse thief; and a deadly Mexican bandit king with a penchant for torture. Assisting the Rangers in their wild chase is the renowned Kickapoo tracker, Famous Shoes.

Comanche Moon closes the twenty-year gap between Dead Man's Walk and Lonesome Dove, following beloved heroes Gus and Call and their comrades in arms -- Deets, Jake Spoon, and Pea Eye Parker -- in their bitter struggle to protect the advancing West frontier against the defiant Comanches, courageously determined to defend their territory and their way of life.